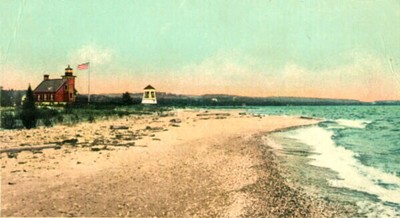 The Little Traverse Lighthouse as pictured
on a 1930 postcard. Used with permission
from the Archives of Michigan.

The Little Traverse Lighthouse, also called the Harbor Springs Lighthouse or Harbor Point Lighthouse was first lit in 1884 by lighthouse keeper, Elizabeth Whitney Williams sending light 13 miles across the bay and into Lake Michigan. The lighthouse design is identical to one built in 1883 in Door County, Wisconsin.
The two-story brick building with an attached, square tower was an essential navigational tool for vessels on Lake Michigan. The community of Harbor Springs rallied for several years to get a lighthouse due to increasing boat traffic coming into Little Traverse Bay and Northern Michigan.

The 40' tower's cast-iron lantern room is 10-sided, has a red roof and a fourth order fresnel lens. A rare, 18' free standing fog bell tower stands next to the lighthouse and was built in 1896 to serve the growing number of pleasure boats coming into the bay and harbor. 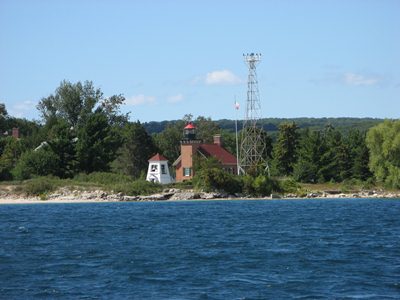 When the Little Traverse Lighthouse was decommissioned, the US Coast Guard erected a 41' white steel skeleton tower. The light on the tower is visible for 14 miles.

The Little Traverse Lighthouse is not available to the public and can be seen only from the water. Occasionally, the Harbor Springs Historical Society hosts a fundraising tour of the lighthouse. Grand Traverse Light Station -- Located on the tip of the Leelanau Peninsula in Northern Michigan, The Grand Traverse Light was established in 1852.
Point Betsie Light Station -- Nestled in a dune just south of Sleeping Bear Dunes National Lakeshore, the tower stands 39 feet tall, but with the height of the dune it towers 52 feet above Lake Michigan.

Manitowoc North Breakwater - Walk out to the end of the pier to this Manitowoc lighthouse, and wave to the carferry S.S. Badger as the ship passes by.
Algoma North Pierhead - This lighthouse can be seen all along the Crescent Beach Boardwalk and is accessible via the pier if you want to venture closer.
Kewaunee Pierhead Lighthouse - Located in Kewaunee, Wisconsin...halfway between Sturgeon Bay and Manitowoc along Lake Michigan.